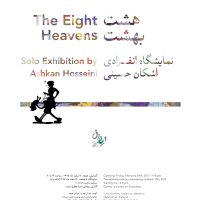 Henry George Clouzot in the path of receiving how to create artwork considers the artist against the white sheet as a standing human at the beginning of a dark tunnel whose ambiguity and suspicion has occupied his mind. It is just the creativity and temerity of artist and imagery, historical and mental knowledge alone that accompanies him in entering and detecting this endless adventurous path. Modernist artist puts away his outfit in this path which we call it “his findings” beside his questions which are named as “his obsessions” so as to achieve new perception and lead mankind to experiencing the joy of this perception.
The process of human life, his questions about cosmos and so many other fundamental questions about Phenomenology, guides human toward seeking through the path of human life history and the artist has his own specific questions in this path. He seeks the reasons for decadence and emergence of art-related viewpoints and for obtaining the answer, looks for help from all other surrounding things and finally for its revival, attempts to create artwork. The creation which is not only considered a precise flashback to the past, but also a jump of his findings with a forward-looking view.
Ashkan Hosseini is a modernist artist who has been facing such questions. He seeks the decadence of Iranian miniature and asks himself that if the technology hasn’t changed the world, what would this art stand? The artist who belongs to recent age and one of its active people and now these upcoming questions has lead him to a new approach and shares his experience with us, by creation of artwork. His paintings comes from mixture of his childhood experiences from comic books and training knowledge from his personal conceptions as a researcher artist. The boundary between reality and imagination that opens our path toward a new world.